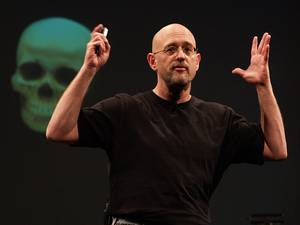 The best of possible worlds; A GLORIOUS EXPERIENCE:  Synthetic HappinessWhat makes you happy? | Playlist | TED.com:
What makes you happy? Happiness is In OUR MIND Actually, the secret to happiness Watch Dan:21:16
Now playingDan GilbeThe surprising science of happiness Sep 2006 Dan Gilbert, author of "Stumbling on Happiness," challenges the idea that we’ll be miserable if we don’t get what we want. Our "psychological immune system" lets us feel truly happy even when things don’t go as planned. Experience simulator our marvelous adaptation skill, how it works. Chose between winning the lottery & becoming paraplegic, handicapped. They are equally happy in their lives. The impact bias; the simulator behaves badly. Passing a college exam has a long duration, and has great impact on UR happiness. Convert adversity to prosperity. The machinery is in our brains, the immunity machine is in our brain; we synthesize happiness, but think, we can find it out there somewhere, …
Post a Comment
Continuation Dr Olga Lazin -Andrei

Suzana Herculano-Houzel: What Is So Special About the Human Brain? | Talk Video & Analysis, transcripts | TED.com

August 03, 2014
Experimentation with the human brain, by Suzana, taken from TED; Suzana Herculano-Houzel: What is so special about the human brain? | Talk Video | TED.com: Cooking OUR Food made Us HUMAN

86 Billion NEURONS, in Kilos,1.2 KILOS, that is 2% of the body weight.
Suzana puts on her detective's cap and leads us through this mystery. By making "brain soup," she arrives at a startling conclusion. What is so special about the human brain?Why is it that we study other animals  instead of them studying us?What does a human brain have or dothat no other brain does?When I became interested in these questions about 10 years ago,scientists thought they knew what different brains were made of.Though it was based on very little evidence,many scientists thought that all mammalian brains,including the human brain,were made in the same way,with a number of neurons that was alwaysproportional to the size of the brain.This means that tw…
Post a Comment
Continuation Dr Olga Lazin -Andrei
More posts