Dimethyltryptamine (DMT) is a potent psychedelic compound that is found within many plants and mammals, including humans. It is used as a recreational drug to induce near death, mystical, spiritual and other-worldly experiences.
It has been outlawed all over the world. In the United States DMT is classed as a Schedule 1 drug under the Controlled Substances Act of 1970, and in the UK it is listed as a Class A drug. One exception in the US is the Santo Daime church, who won the right to ingest ayahuasca, an ancient tea that when brewed forms active DMT, as part of their religious practices. 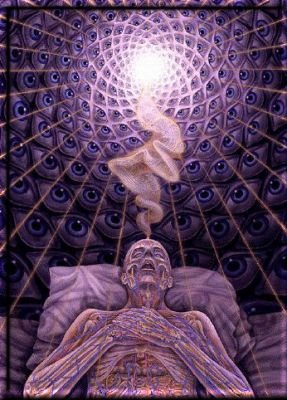 In his widely received book DMT The Spirit Molecule Dr. Rick Strassman M.D. theorizes that Dimethyltryptamine is produced within the Pineal Gland of the human brain, the proverbial third eye. This may be supported by evidence of DMT within human cerebrospinal fluid, although science has yet to determine exactly the origin of the compound within the body.
Strassman suggests DMT’s psychedelic properties may explain the phenomenon of near death and naturally occurring mystical experiences. The body may release DMT spontaneously during dreams or when close to death. Rick notes the significance of the Hindu and Buddhist teachings of the Crown Chakra and 3rd eye, in relation to the meditative and enlightened states practitioners can master. It’s possible through meditation that DMT is released via the Pineal Gland.
He doesn’t however reject the importance of these experiences and proposes DMT’s use in therapy, self-improvement and further scientific exploration of areas previously ignored by modern medicine, but long known to the shamans and mystics of ancient cultures. He speculates that although DMT may explain the brain’s reason for seeing other worlds and entities, it does not explain whether they are whole creations of the brain or something authentic that the brain tunes in to.

During his DEA approved research in the 90s Dr. Strassman compiled a list of patient notes that revealed a cannon of similar experiences, suggesting DMT produces universal effects. These included seeing DNA-like helices and spirals, the sensation of being a child often in other-worldly play rooms, as well as meeting independently acting non-human beings like aliens, elves and clowns. Some were malevolent and others loving.
From his patient reports Strassman suggests alien abduction accounts may be psychedelic and not physical, due to the the spontaneous release of DMT in the body.
Many of his volunteers claimed their DMT trips were life changing, opening them up to new ideas, spiking creativity and in some cases alleviating the fear of death, due to the sense that there is somewhere for consciousness to go beyond the physical realm. Interestingly his research was funded by the Scottish Rite Freemason organization, whose teachings are often linked to the ancient mysteries.
Of course hallucinogens are not for everybody, especially young people with developing minds. Like any other drug DMT rehab is actually a thing. 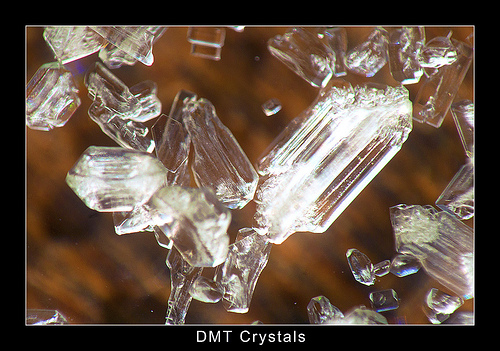 Methods:
There are several methods of experiencing DMT, although the majority of these are illegal in the Western world. It can be smoked, injected or consumed in a traditional ayahuasca tea.
Trip Reports:

Comedian, MMA commentator and psychedelic advocate Joe Rogan is an outspoken supporter of Dimethyltryptamine (DMT) and the theories of Rick Strassman. Here is one of his many accounts of the compound:
Modern entheogen pioneer Terence McKenna discusses an intense trip on DMT:
3rd eye opening 5th dimensionla Dimethyltryptamine DMT ZARATHUSTRA